This document describes how to use MATLAB, a matrix-based, technical computing language and environment for solving engineering and scientific problems, on the Savio high-performance computing cluster at the University of California, Berkeley.

As of summer 2019, you no longer need a MATLAB license to use MATLAB on Savio.

To load MATLAB into your current software environment on Savio, at any shell prompt, enter:

Once you are working interactively with MATLAB, you can then enter the ver command at MATLAB's interactive '>>' prompt to view all of the MathWorks® Add-Ons (Toolboxes and Applications) currently provided on Savio; e.g.:

To run MATLAB in batch mode on Savio's compute nodes, enter the command sbatch followed by a single argument: the name of (or full path to) a job script file.

Inside that job script file, at or near the end of that file, you will include the following:

Here's one example, which loads MATLAB, receives input from your script file, and saves selected output into an output log file:

MATLAB is capable of distributing computations across multiple cores, allowing your scripts or functions to execute those computations "in parallel." That can significantly speed up some computational tasks.

MATLAB on Savio includes a license for the Parallel Computing Toolkit, which facilitates parallel computation on one node. To use parallel computing features, you'll need to run MATLAB code that uses one or more of the parallel commands, functions, etc. available within the MATLAB programming language.

Here's an example of a job script to run a MATLAB job that contains parallel computing code, in batch mode, on up to the full 20 cores offered by a compute node on the savio partition:

To learn about the features of the MATLAB programming language that are capable of performing computations in parallel (e.g., parfor, batch(), spmd, and others), and how to use them in MATLAB scripts and functions, please see the MathWorks documentation, Introduction to Parallel Solutions or the brief discussion in the next section.

In addition, some MATLAB products can intrinsically use parallel computing features without requiring coding, perhaps simply by setting a flag or preference, as described in Parallel Computing Support in MATLAB and Simulink Products.

Controlling the number of cores used in MATLAB jobs¶

There are a various ways to control the amount of parallelization in your MATLAB code. This discussion briefly outlines two ways, focusing on use of parfor for parallel loops and on threading.

If you are running a job on the savio2_htc partition, using less than the entire node, or if you are running multiple jobs on a node that you have exclusive access to, you'll want to carefully control the number of cores in use by your MATLAB job(s).

By default, a variety of MATLAB functions will use threading to do computations in parallel. To turn threading off, you can start MATLAB with the -singleCompThread flag:

Or, to control the number of threads used by your MATLAB process from within MATLAB, you use this syntax, in this case to use 5 cores (threads):

MATLAB allows you to execute for loops in parallel via parfor. You'll first need to set up a pool of workers via parpool(), which determines how many workers will be used to execute the iterations of the loop. MATLAB will set a default number of workers (the default is 12 workers), but if you want to use fewer workers (e.g., to share the cores on a node across jobs) or more workers (e.g., to use all the cores on a node you are using exclusively), you can tell parpool() how many workers to start.

Here's an example of how to do this, in this case taking advantage of all the cores on a node:

Or to use as many cores as requested via --cpus-per-task:

As an alternative, if you want to change the default number of workers (e.g., to 20 if you are always using the savio partition), you can modify your underlying parallel profile by running the following code one-time only in MATLAB.

To run MATLAB jobs that contain parallel computing code on Savio's Graphics Processing Unit (GPU) nodes, you'll need to write, adapt, or use MATLAB code that has been written for GPU access. To learn how to write or adapt MATLAB code that uses GPUs, please see GPU Programming in MATLAB.

When submitting your job, make sure to request one or more GPUs for its use by including the --gres=gpu:x flag (where the value of 'x' is 1, 2, 3, or 4, reflecting the number of GPUs requested), and also request two CPUs for every GPU requested, within the job script file you include in your sbatch command or as an option in your srun command. For further details, please see the GPU example in the examples of job submissions with specific resource requirements. You can monitor GPU usage and availability on your node by entering nvidia-smi from the UNIX command line (e.g., in an interactive session), as described further below.

If you requested a single GPU, you can set that up for use within MATLAB as follows:

To use multiple GPUs (each GPU node has 4 GPUs) in the same MATLAB job, you'll first need to use --gres=gpu:x in your job submission (where 'x' is either 2, 3, or 4) and then use parfor to start up multiple processes, as with this demo code:

To check on the current usage (and hence availability) of each of the GPUs on your GPU node, you can use the nvidia-smi command from the Linux shell within an interactive session on that GPU node. Near the end of that command's output, the "Processes: GPU Memory" table will list the GPUs currently in use, if any. For example, in a scenario where GPUs 0 and 1 are in use on your GPU node, you'll see something like the following. (By implication from the output below, GPUs 2 and 3 are currently idle - not in use, and thus fully available - on this node.)

The MATLAB Distributed Computing Server (DCS) toolbox (for MATLAB R2017b) and MATLAB Parallel Server (for MATLAB R2019a) allow one to run MATLAB jobs across multiple nodes. There are a few things you need to do to get it set up, but once you do, the parallel code you use in MATLAB will be the same as discussed in the previous section.

One important limitation of this functionality is that the campus license only provides Savio with 32 MATLAB DCS licenses for MATLAB R2017b. This means that across all Savio users, only 32 MATLAB R2017b workers can be operating at once. Even if you are using all the licenses, 32 workers is not much more than the number of cores on a node on most Savio partitions. However, note that it is possible to use multiple threads per worker, so one can potentially use more than 32 cores across multiple nodes for your MATLAB DCS-using job.

For information about how to use this, see Running MATLAB jobs across multiple Savio nodes.

Interactive GUI use via Open OnDemand¶

If you'd like to use the full MATLAB GUI (graphical user interface), including for displaying graphics, we recommend our MATLAB app in Open OnDemand (OOD), which provides the MATLAB GUI within a desktop environment in your browser window. However, you can run MATLAB interactively without using the OOD Desktop as discussed next.

Here's how to run MATLAB interactively, so you can interact directly with this application at its command line, as contrasted with running it in batch mode.

Step 2: Load and run MATLAB from that shell¶

To start MATLAB for interactive use, via its command line, you can then enter

Interactive GUI use via X11 forwarding (not recommended)¶

When you're running MATLAB on Savio in interactive mode, you can also set it up to display plots and similar graphical output on your computer via X11 forwarding. While we recommend using our Open OnDemand MATLAB app instead, here are some instructions if you want to use X11 forwarding:

Step 1. Have X Window software installed and working on your computer¶

You'll need to have X Window software installed and working on your computer. For instance, for Microsoft Windows, you can use Cygwin/X . For Apple devices running macOS, you can use XQuartz.

Step 2. Log into Savio using the '-Y' option to SSH¶

To enable applications like MATLAB and others to interact with the X Window software on your computer, log into Savio using an ssh command that includes the -Y ("trusted X11 forwarding") option; e.g.:

Step 4: Load and run MATLAB from that shell¶

To start MATLAB for interactive use, via its command line, in a manner that also generates graphical output from that application, you can then enter:

Here's a quick way to try out MATLAB in graphical, interactive mode, by generating a test plot.

The following statements, entered successively at MATLAB's interactive '>>' prompt, will display a simple plot of squares of the integers 1 through 10:

If all goes well, running the plot command, above, should result in output similar to the following being displayed in a window within your computer's X Window application: 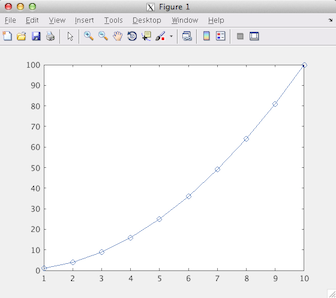